Whether one is looking for cultural sites, beautiful sandy beaches, or wilderness, Morocco concentrates all these attractions on its territory. Rich of several centuries of history, the kingdom is home to a beautiful historical and architectural heritage that can be discovered on the road to the imperial cities: Rabat, the capital, Marrakech, Fez, and Meknes. Cities surrounded by ramparts, they reveal themselves through their lively medinas and colorful souks.

Rather want to laze around? Head for the Atlantic coast and its long sandy beaches. Between Agadir, a modern city, and Essaouira, the perfect spot for water sports, Morocco boasts beautiful seaside resorts, as well as important fishing ports that drive the local and national economy. 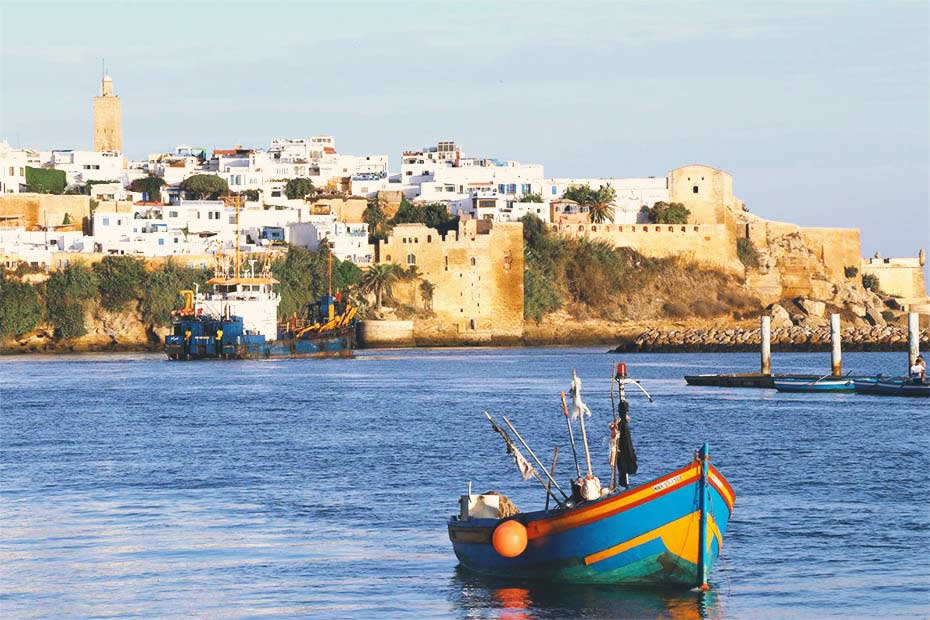 Finally, if one is in search of amazing landscapes, the country abounds in natural sites suitable for hiking. With an incredibly varied relief, there is something for everyone: trekking in the sand dunes of the Sahara, escapades to meet the Berber people of the desert, hikes in the Atlas Mountains, walks in the heart of green palm groves planted with palm trees… Morocco also has generous gastronomy, and a welcoming population always delighted to share its culture and the treasures of its region.

What are the best most visited Moroccan cities?

As said above, Morocco has a lot of places to visit and discover whether for its culture, change of scenery, gastronomy, friendly people, and so on.

To make it easier for you to find the best and most visited Moroccan cities so that you would get informed and ready to buy your ticket to Morocco and to know where to go we have compiled this list of 10 best most visited cities in Morocco.

Top 10 of the best most visited cities in Morocco! 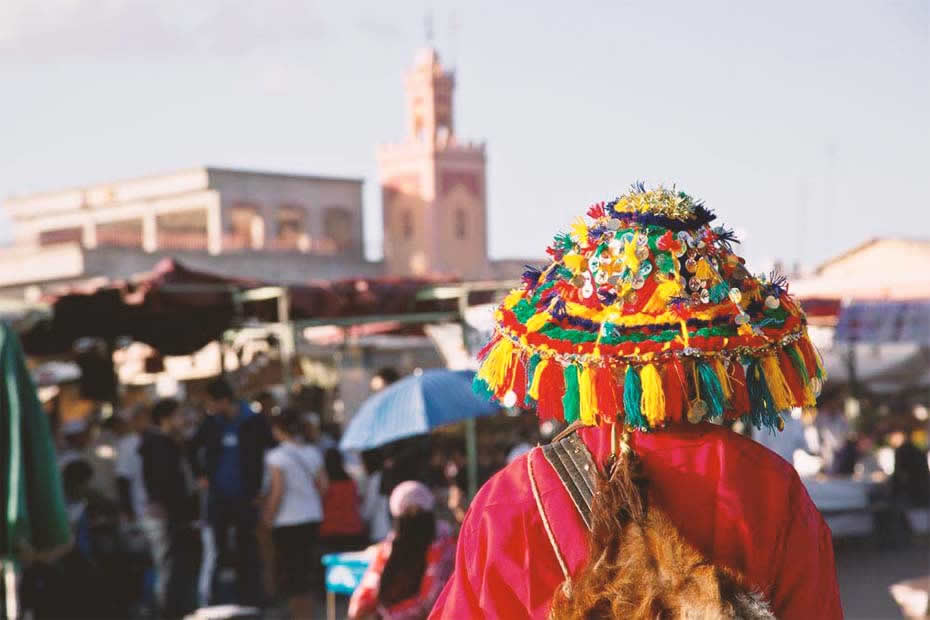 Morocco is a country with very varied landscapes. From Tangier to Dakhla, here are the top 10 Moroccan cities to visit to get the full “Moroccan experience”.

The exotic destination of Marrakech is definitely a place full of surprises. With its countless markets, gardens, palaces, and mosques, you will be amazed. Also known as the red city, Marrakech is the fourth biggest city in the Kingdom of Morocco after Casablanca, Fez, and Tangier with more than one million inhabitants, it remains the country’s tourism capital. More than a city, Marrakech is a pearl polished by history and has always known how to welcome its guests with open arms. known also for the Jemaa el-Fna Square, the city is one of the most unique Moroccan cities especially at night. Discover the beautiful nightlife of Marrakech.

Here is a video below made by Antoine Janssens to give you a glimpse of Marrakech’s beauty:

Questions about Marrakech? We’ve got the answers 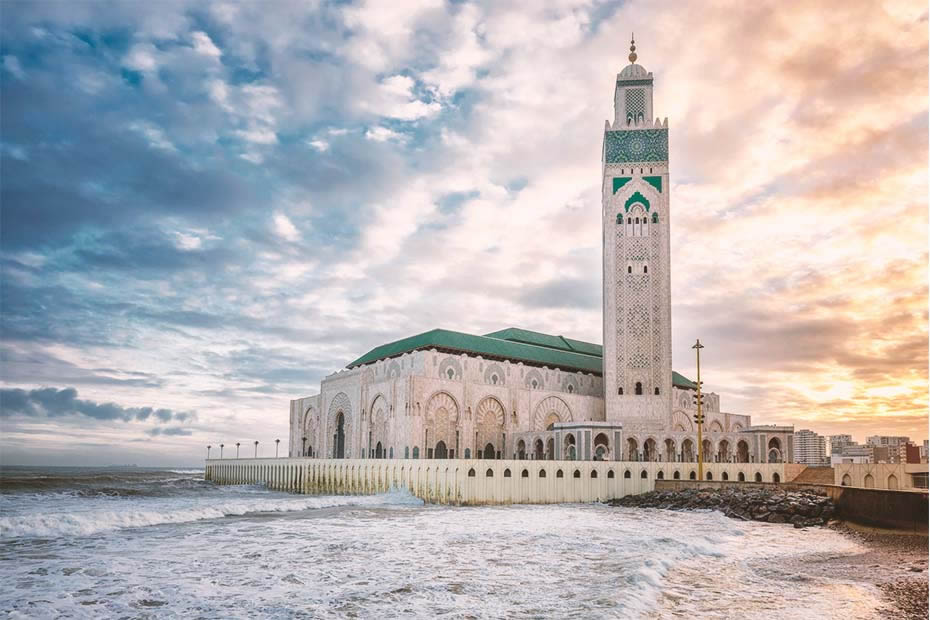 Casablanca has grown from a small town to one of the biggest in the world, thanks to its new forms of modern architectural construction, it has become a major industrial and commercial center more open to the Western way of life than other Moroccan cities. Casablanca is today the economic capital of Morocco and its biggest city, located on the Atlantic coast bordered by magnificent beaches that make it a seaside destination still rivaled. Casablanca is about 80 km south of Rabat, and 8 Km from El Jadida to the south by highway, with a population of over 4 million inhabitants that makes it the most populated city in the Maghreb.

Questions about Casablanca? We’ve got the answers 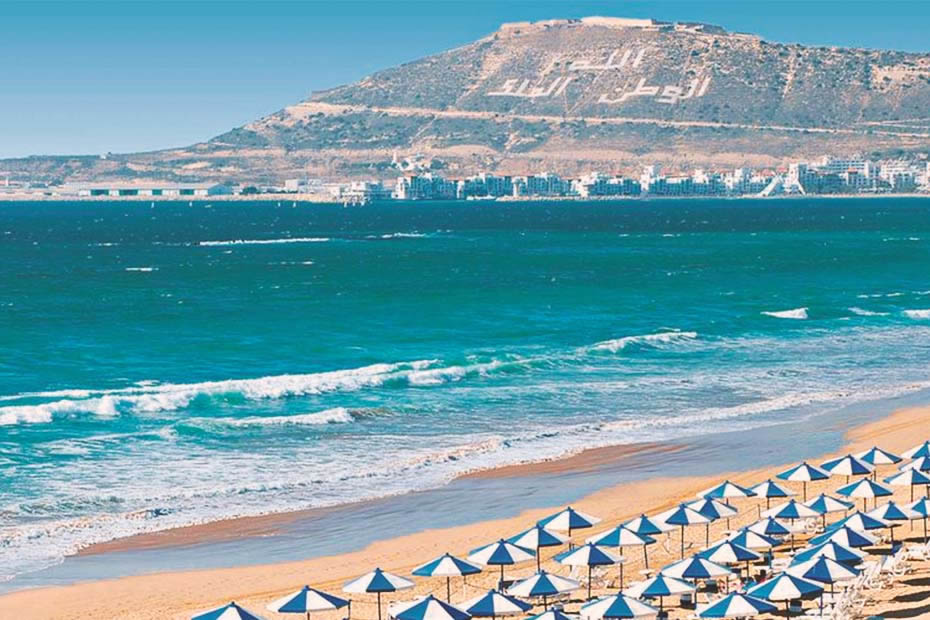 The ocean offers huge beaches of about 10 km. There, the fine sand and the beautiful and warm sunshine gives the impression that we live in paradise all year long, being 3 hours from the main European cities. Agadir is a small Amazigh town in southwest Morocco, located on the Atlantic coast, in the Souss region, at 508 km south of Casablanca, 173 km from Essaouira, and 235 km west of Marrakech. With 900,000 inhabitants, in a magnificent site and in an ideal climate, Agadir can make you forget all your worries.   Agadir has beautiful palm-lined boulevards and lots of restaurants on the waterfront. Agadir, the first seaside resort in Morocco, has a distinctly western atmosphere due to the many European tourists, especially Germans!  Here are some places to visit in Agadir that you shouldn’t miss. 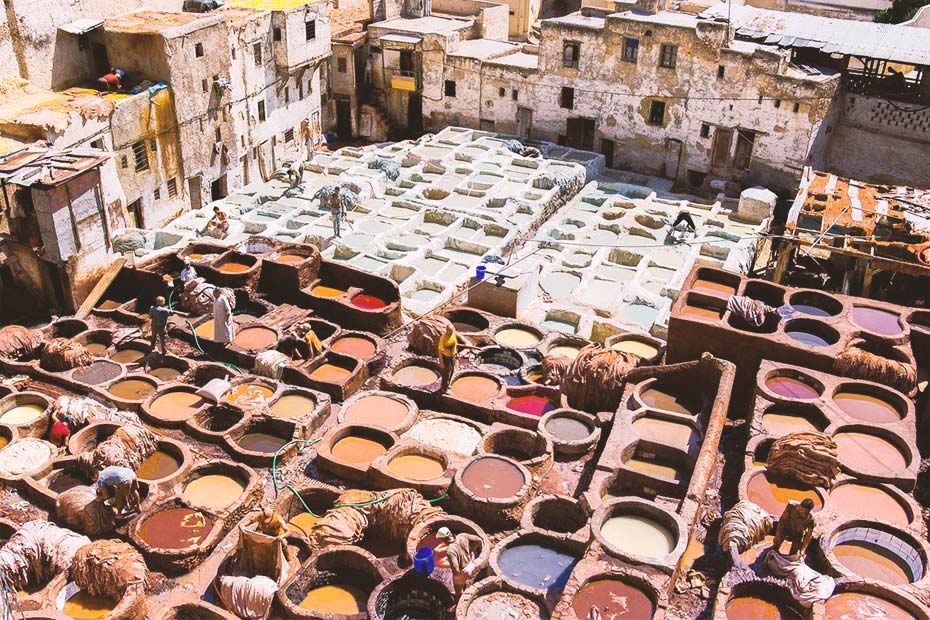 The imperial city is the capital of the traditional culture of Morocco. Cradle of knowledge, the oldest library in the world as well as the first university are the pride of Fez. This fortified city, a UNESCO World Heritage Site, will take you back to the Middle Ages. Located inside the medina, the entrance to the Bab Bou-Jloud district is through its huge 1913 door, decorated with blue and green earthenware, the colors of the city. Fez is divided into two parts: the old city and the new one.

A coastal city, its coastline cover nearly 60 kilometers of coastline where rocky coves and fine sandy beaches follow one another. Its backcountry offers an ideal ecological diversity for hiking. Rabat is the administrative capital of Morocco. It is located on the Atlantic coast and on the left shoreline, south of the river at the entrance of the Bouregregreg, facing the city of Salé. These two cities are for this reason qualified as “twin cities”. It has a little over a million inhabitants. A pleasant climate all year long, a privileged location on the Atlantic coast, and an exceptionally rich history that makes Rabat a first-rate tourist destination. It benefits from a unique historical heritage, reflecting the diversity of heritages that have shaped the two shores of Bouregreg over the centuries. Rabat is one of the only cities to have preserved its historical and cultural heritage. Since June 2012, a group of sites in the city of Rabat has been inscribed on UNESCO’s World Heritage List as a cultural property. The ministries and the highest administrations are located there, and of course, we shouldn’t forget to mention the Royal Palace. Here are some places to visit in Rabat that you shouldn’t miss.

Here is a video below made by Liakoth to give you a glimpse of Rabat’s beauty: 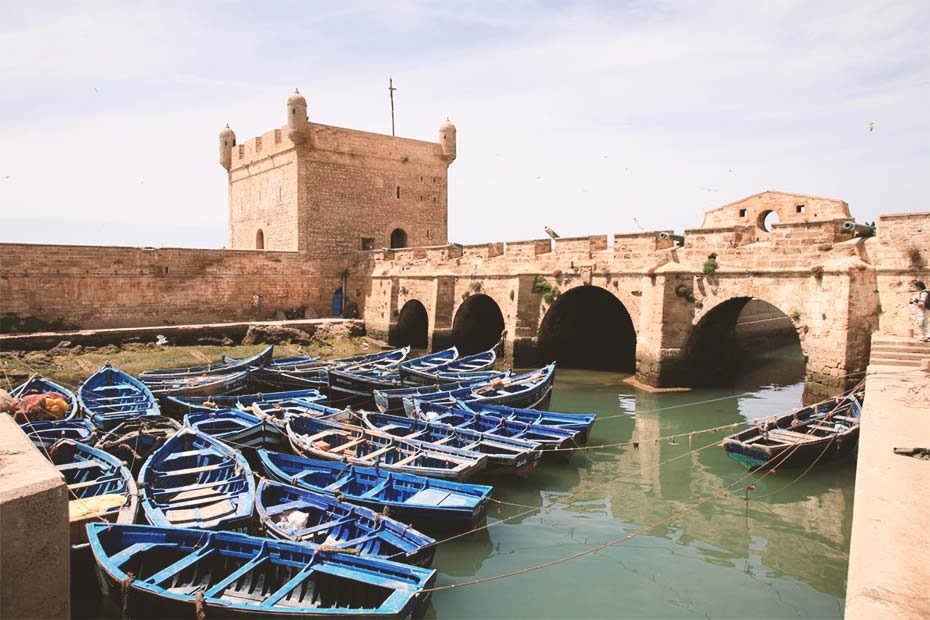 The city of Essaouira is a tourist treasure, thanks in particular to its natural, historical and cultural assets, it is becoming a major tourist destination. Its medina (a UNESCO World Heritage Site), the Mogador Island, its port (dating from the 18th century), a superb coastline and its beaches, allowing the practice of water sports, making the province a quality tourist destination. Located on the Atlantic coast, Essaouira is a fishing port city with about 78,000 inhabitants, the city is located in the north of Agadir, west of Marrakech, and 406 km south of Casablanca. Essaouira is a lively seaside city overlooking the Atlantic Ocean and a real pleasure of ancient and modern architectural style, with pretty hotels set up in traditional Moroccan riads in the old city. Furthermore, the city has increasingly English-speaking.

The dunes of Merzouga are nestled in the Moroccan desert in the Errachidia province which is in the region of Dra-Tafilalt. It is famous for its huge sand dunes. There are many activities available like Camel rides, quad biking on the dunes, a night under the wide and starry sky, hiking in the desert to admire the beauty and changing shapes and colors of the dunes. No doubt, if you like adventure, Merzouga is the perfect place.

Here is a video below made by SamAfro to give you a glimpse of Merzouga’s beauty: 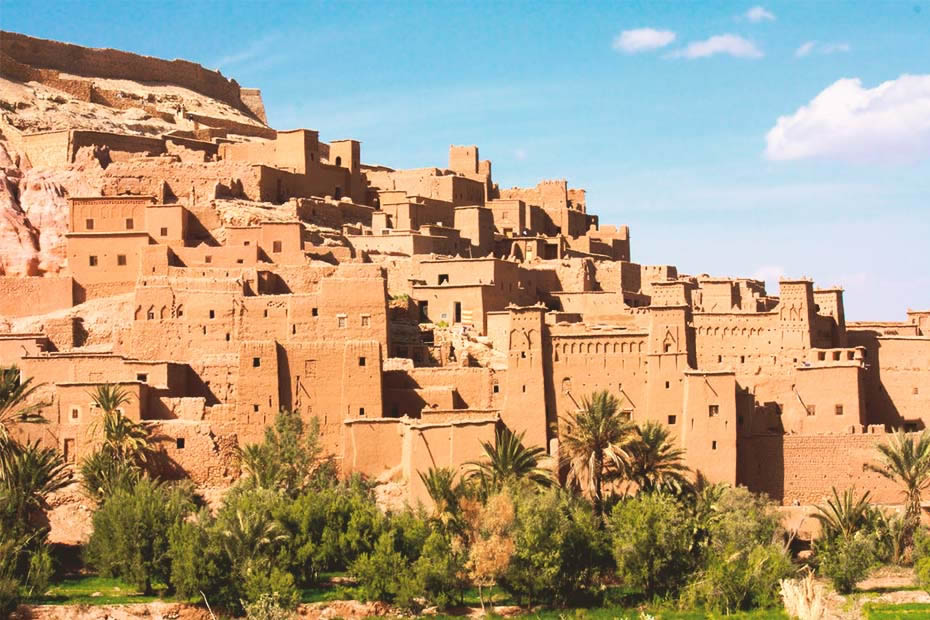 The film studios have nicknamed it “the Hollywood of Morocco” and even “Holly-Ouarzazate”. It is an oasis of caramel color highlighted by the cloudless azure of the North African sky with its countless mud kasbahs, arid mountains, and plains, green valleys and oases, palm groves and villages of red or ochre earth. All of this landscape makes the charm of this region and give it its tourist attraction. The symbol of the city is the kasbah of Taourirt which belonged to the Glaoui, it would have been built around the middle of the 18th century. It is represented in the new 50 dirhams bills and is situated next to the medina. This Moroccan city located at the crossroads of the valleys of wadi Ouarzazate and Dades (from the High Atlas) which form the Draa wadi downstream of their confluence. It is the nerve center of a vast region in southern Morocco. Ideal for holidays in an idyllic environment to live absolutely! 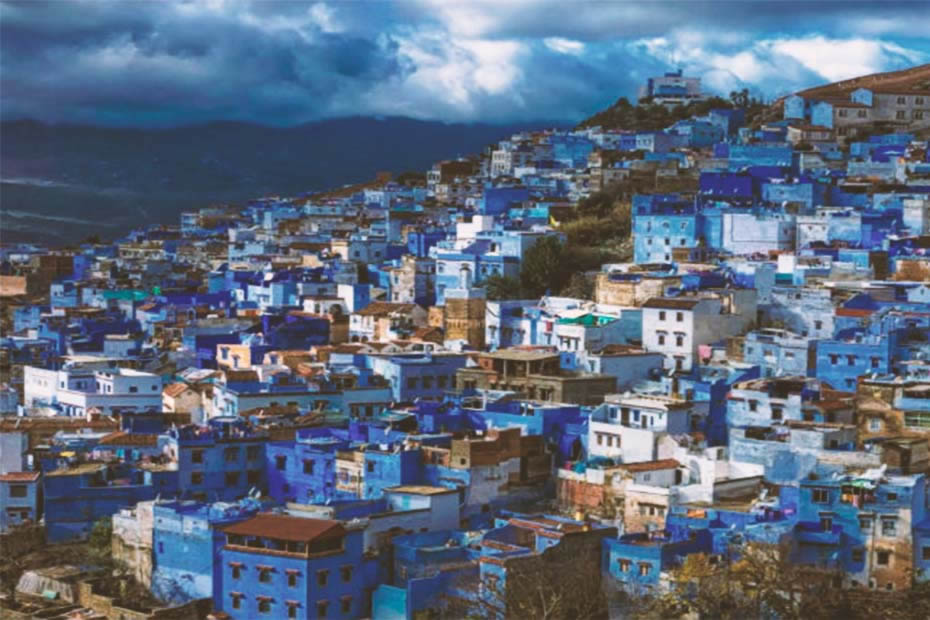 Located in the heart of the Rif Mountains, Chefchaouen has a particularly calm atmosphere. All the buildings in the center are painted in a beautiful and relaxing blue tint, which gives a very Zen and a bit surrealist atmosphere to the city… Because of that, it has become one of the most “instagramed” places on the planet.
Chefchaouen is also known for the production of leather, which explains why many shops offer very beautiful leather bags, shoes, and sandals at an affordable price.
Don’t forget to visit the small abandoned church at the top of the hill and from there admire the breathtaking view of the city. 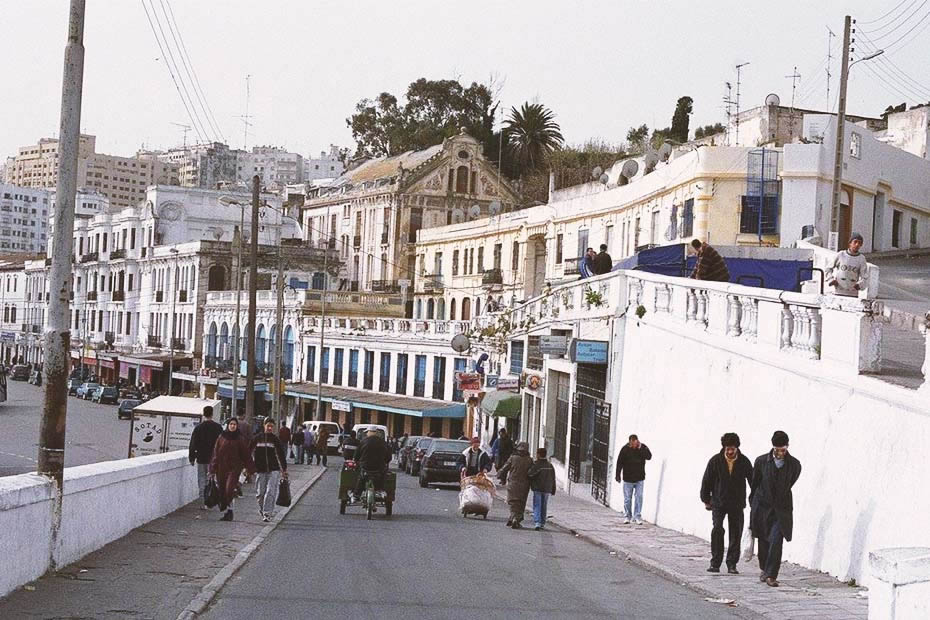 Tangier has long served as an informal cultural capital for a number of writers and artists from all over the world. It also attracts real estate developers mainly from the Rif and elsewhere. Located on the Strait of Gibraltar, which separates Africa from Europe, about 15 km from the Spanish coast, and on the periphery of the Rif mountain range, it offers an exceptional view of the other side. Tangier has long been an important strategic place. With its two thousand and five hundred years of existence, it has a population of one million inhabitants today, it is one of the oldest cities in North Africa. Its medina, kasbah, bazaars, and souks are among the most lively in the country, and its magnificent beaches are about 7 km. In the last century, Tangier has become one of the most popular places in the international jet set and is an important seaside resort. Tangier has a wide range of hotel and tourist facilities and a medina that attracts huge numbers of visitors. There, Spanish is more spoken than French. 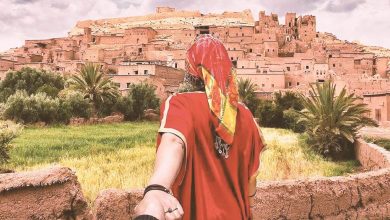 Why everyone should visit Morocco 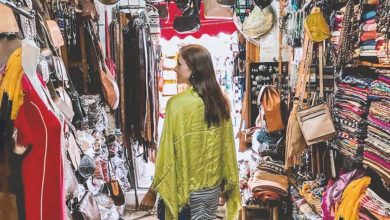 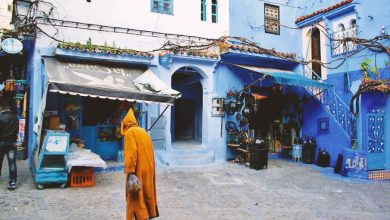 All the Do’s and Don’ts in Morocco: A Comprehensive Guide [2023] 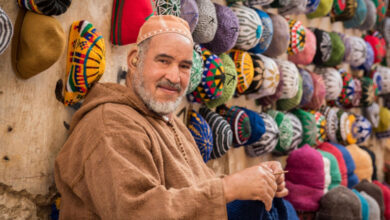 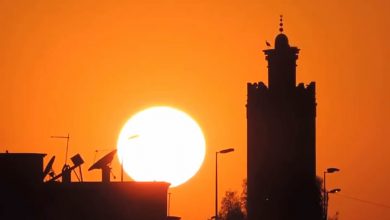 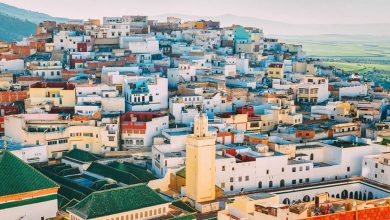 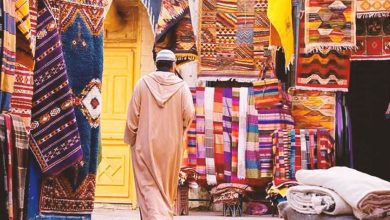