There are well-known beautiful beaches and surf spots in Morocco,  but few persons know that several kilometers of the Moroccan coast are still totally wild. No tourist infrastructure, not a thing. Just vast stretches of pristine beaches that can still be enjoyed before they are transformed into seaside resorts. Some are known, others don’t even have a name. Here is Morocco’s most beautiful wild beaches on the Atlantic and Mediterranean. 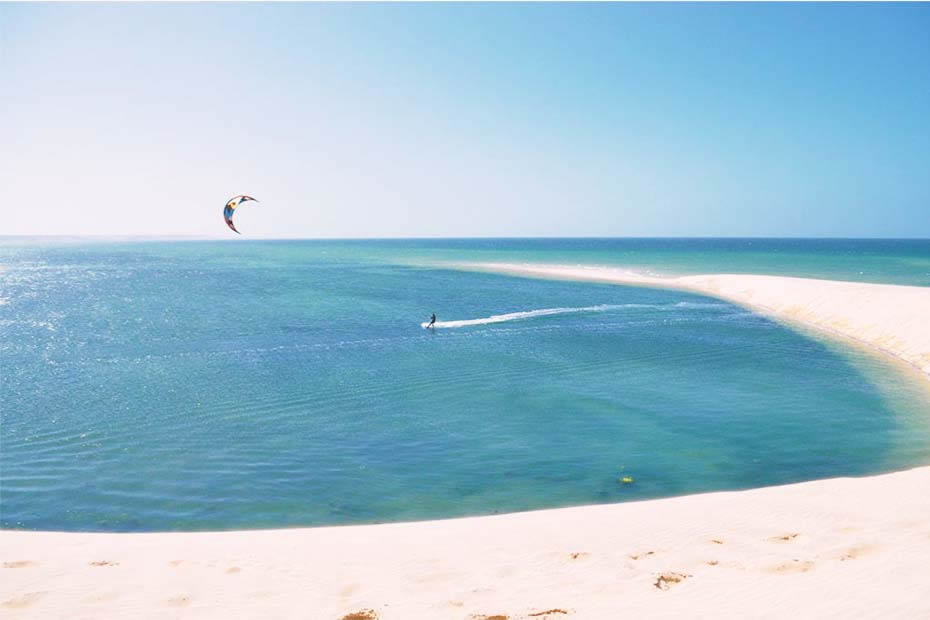 It stands like a mirage in the middle of the Dakhla lagoon at the crossroads of the Sahara desert and the Atlantic Ocean in the great Moroccan south. The island of the dragon, which takes its name from its shape reminiscent of the backside silhouette of a dragon, is bordered by white sandy beaches and turquoise water. It’s like being parachuted into a tropical island in the Caribbean. From the top of the rocky promontory, you can admire the beauty of the 360° panorama over the bay of Río de Oro on one side and the waves of the Atlantic Ocean on the other. It’s spectacular! For a lot of people, it is certainly THE most beautiful wild beach in Morocco.

By driving on the only path along the coast south of Dakhla towards Mauritania, the traces of civilization are gradually disappearing. We feel a little bit like in a “no man’s land”, with villages that seem abandoned, then nothing, just military checkpoints and road markers indicating the next border cities. And then, by turning around the road, we find ourselves on a superb stretch of white sand, a wild beach named Puerto Rico. This wild beach is a meeting place for migratory birds and its isolated location makes it an excellent place to camp in a Saharan bivouac. 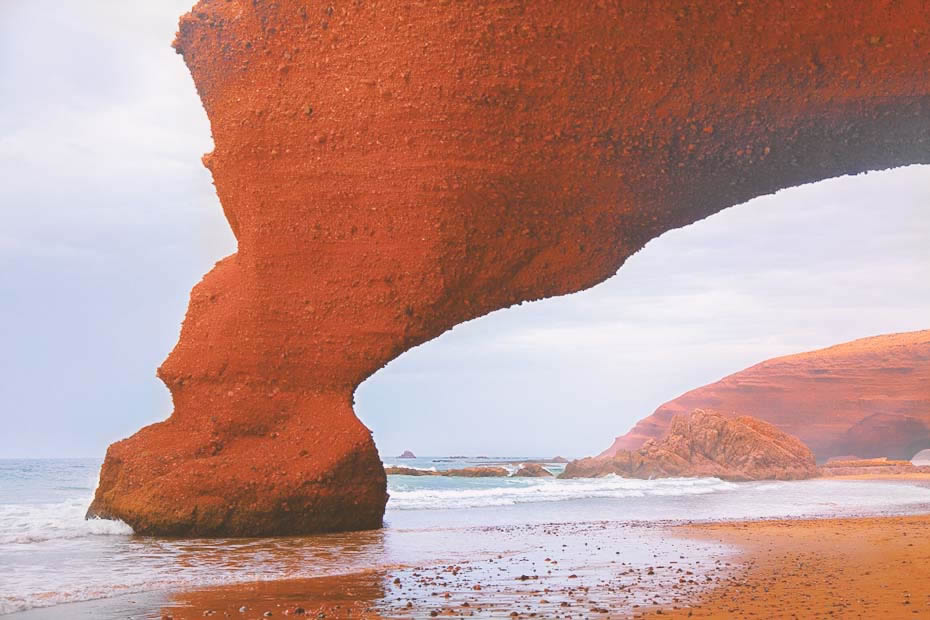 Legzira beach in Sidi Ifni doesn’t seem that wild at first sight. You can access it by going down 200 steps from the tourist complex that has (unfortunately) taken over the area. But all you have to do is move away from the complex to find yourself alone in the world in front of majestic cliffs in front of the ocean. The tides have created several arches in the rock whose ochre colour is sublimated at sunset. The wild Legzira beach is particularly popular with surfers who come to confront its regular tubes. Hikers, on the other hand, enjoy exploring the crevasses and caves revealed in the low marshes.

In the list of the most beautiful wild beaches in Morocco, the white beach of Guelmim must be mention, on the coastal road that connects Agadir to Tan Tan, is the longest and wildest beach in Morocco. This beach known as the Playa Blanca, is a gigantic expanse of white sand dunes located in the heart of a 250 km² ecological park (facing/in front of) the Canary Islands. The region offers exceptional landscapes, desert and sea, mountains, oases, kasbahs and small fishing villages. The sand dunes of the white beach are a real playground for lovers of 4×4 excursions.

The road to the Cap des trois Fourches in Nador winds through dramatic landscapes of cliffs and wild beaches. The view from the top of the lighthouse at Cap des Trois Fourches is breathtaking. In this universe cut off from the world, the only sign of civilization is the village of Tibouda, a fishing village located on the wild beach of Tibouda. The wild Charrana beach, not far from there, is a small isolated cove with sparkling turquoise waters that invite you to swim. The wild beach Carra Blanca is a popular scuba diving spot in Morocco.

#6 The wild beach of Sid el Bachir in Saidia 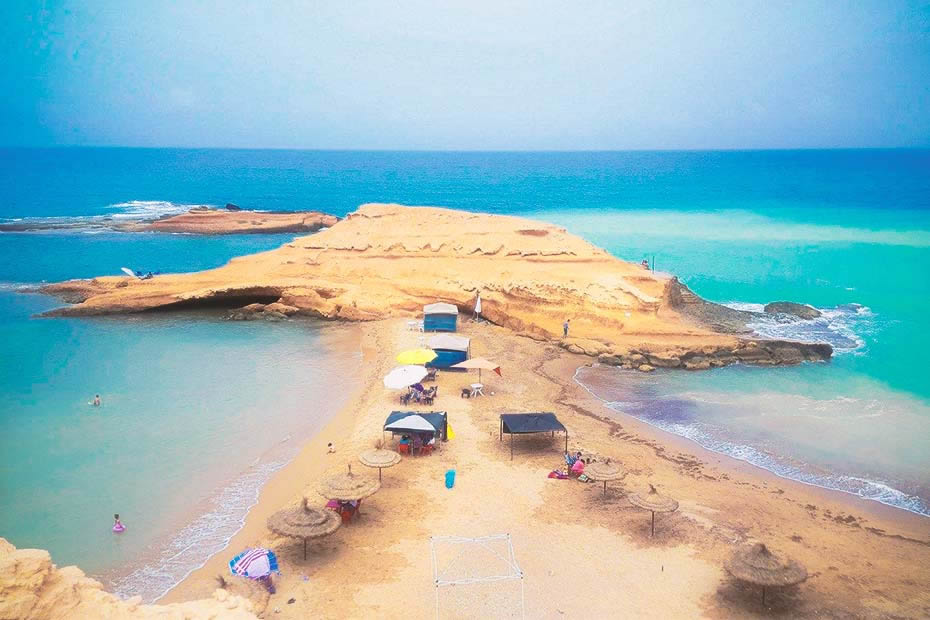 In Saidia, Morocco’s most popular seaside resort in the Mediterranean, much of the coastline has been devastated by concrete. But some wild beaches have escaped major real estate projects. This is the case, for example, of Sid el Bachir beach, which is accessible through an unspecified path. The breathtaking cliffs surrounding the beach give it that mysterious air of unknown territory. Other isolated wild beaches “without names” are to be discovered along the coast of the Oriental region. All you have to do is roll down the window and gently ask for the wise advice of the locals.

The coastline between the small villages of Mirleft and Sidi Ifni is one of those lost spots that surfers jealously guard secret. Beach break and Point break are practically available all year long on the beaches of Sidi El Ouafi, Tabograichte, Imin Targa, Tamahroucht,or the most popular Sidi Mohammed Ben Abdellah. Some wild beaches are almost impossible to find without the help of locals and are only accessible through trails.

#8 Wild beach from Tafedna to Essaouira

In the Essaouira region it sells all year long, which makes it the perfect place to enjoy water sports such as kitesurfing and windsurfing. In the Agadir region, it is summer all year round, an opportunity to get your fill of vitamin D. Between the two cities, there is a lot of wild beaches. Around Essaouira, there is the beach of Tafedna, a small haven of peace, and for the beach of Imesouane, a real eldorado for hippie surfers. The beaches of Diabat and Sidi Kaouki offer great opportunities for horseback riding (or why not on camels). In the Agadir region, some prefer to stay in the north of the city around Taghazout and Aourir rather than pile up like a sardine with the thousands of tourists who invade the beach of Agadir.

#9 Wild beaches between Tangier and Assilah 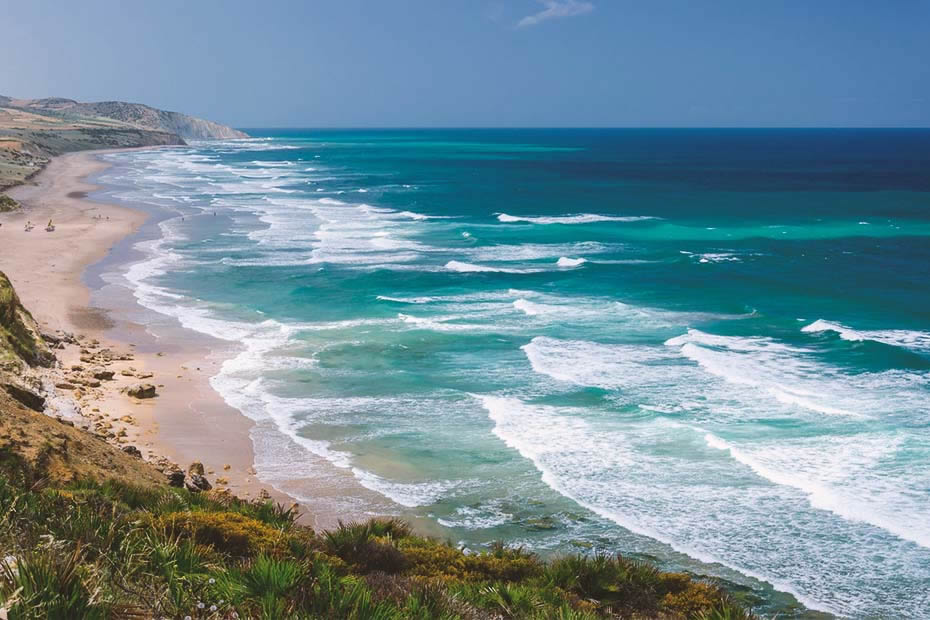 The national road linking Tangier to Assilah is full of wild beaches. It is quite easy to find your own quiet spot to plant your beach umbrella on the long stretches of golden sand along the Atlantic coast, starting with the beaches of Achkar and Bel kassem near Tangier and ending at Las Cuevas, Briyech or Sidi Mghait near Assilah. Don’t miss the superb panorama from the top of Cape Spartel and the magnificent vistas of Perdicaris Park in Tangier! 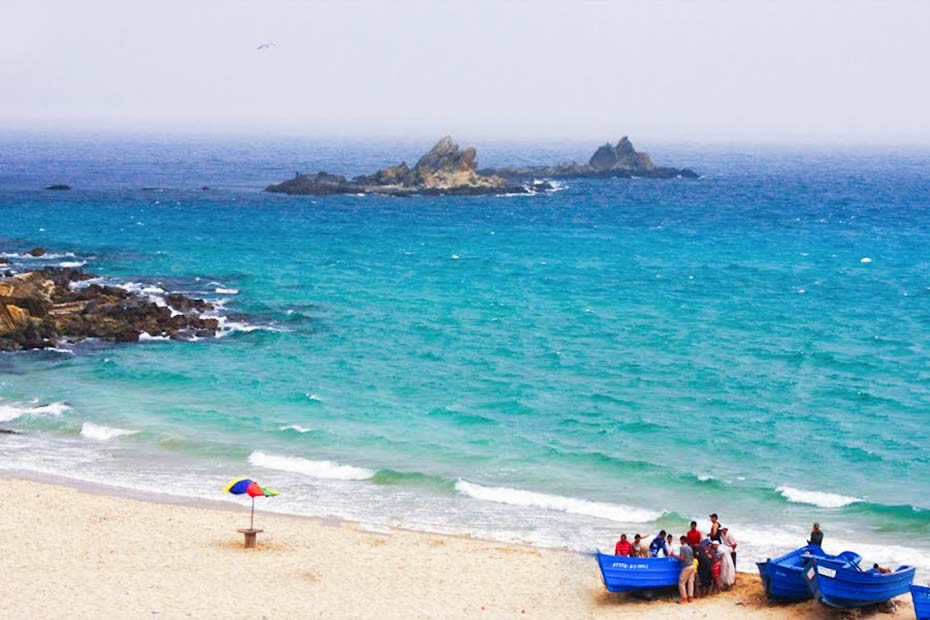 A favorite with Tangier families, Dalia beach is seductive with its wide sandbanks and its turquoise (and very cold) waters on the Mediterranean coast. It is especially important to avoid going there in July and August during school holidays when the wild beach becomes a real playground for holidaymakers. Jetskis, trampolines, inflatable slides and DJs disturb the charm of the place. 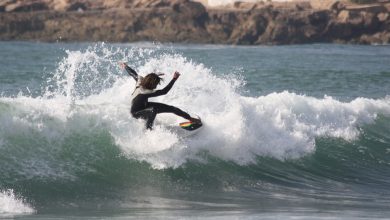 The 10 best surf spots in Morocco from a surfer’s word!